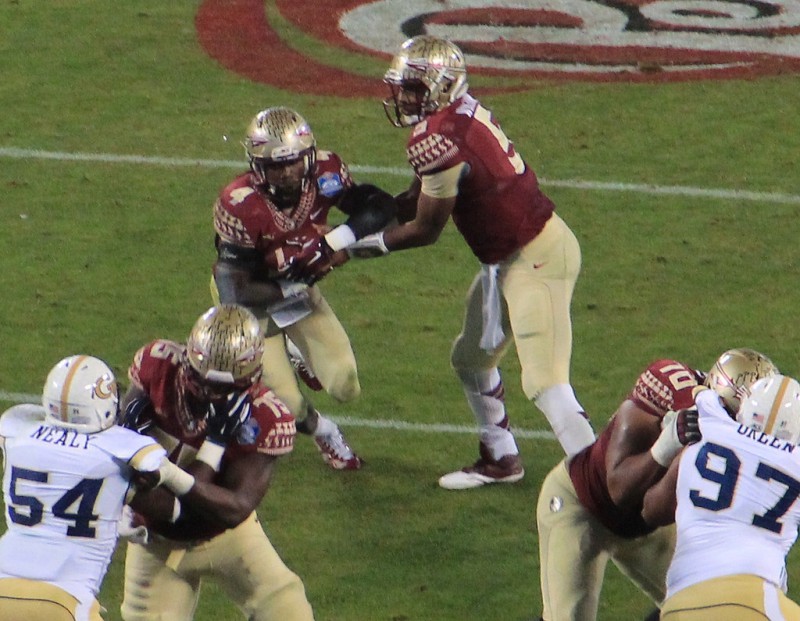 Welcome to the College Football Market Share Report, where each week I’ll be running through the players who are shouldering an exceptional percentage of their team’s offense.

By tracking these stats on a weekly basis in season, my hope is that we can more easily identify exceptional talents before everyone else does.

Note that the commentary below will highlight the most recent week’s top performers as well as seasonal leaders. Also, since this is somewhat of an experimental article, I’m going to ask for your feedback on how this should evolve moving forward, so feel free to leave a comment. For instance, this week I’ve added height and weight based on a reader request.

Be warned that this article is dense with numbers. I’d recommend skimming through the names and then checking out the blurbs at the bottom of each section.

**Finally, if you are introduced to any new players through this article, and you end up writing about them, please link back to this work. Thanks!**

Quarterbacks of the week

The two names that stand out to me on this list are Chad Kelly and DeShone Kizer, both quarterbacks from top 10 teams that lost on the road this week. Yes, they both had an interception, but otherwise performed pretty impressively. I think this just speaks to the idea that every quarterback needs a running game to keep the defense honest.

Of quarterbacks on top 25 teams, Baker Mayfield is pretty easily the “best” quarterback, in terms of market share of offense. Obviously his passing contributions go a long way, but Mayfield gets a huge boost from his legs, having accounted for 21% of Oklahoma’s rushing yards. Prior to a season closing stretch @Baylor, vs TCU, @OK State, he’s got a good chance to get his team to 9-0 and get into the discussion as a serious contender for the Heisman … elsewhere in the top 25, Mason Rudolph (Oklahoma State) has quietly amassed 66.8% of his offense, while national-sweetheart Trevone Boykin (TCU) stands at 64.9%. For reference, the last four Heisman-winning quarterbacks averaged 64.6% of their team’s yards… the best top 25 quarterback from a conference other than the Big 12 is Ole Miss’s Chad Kelly (62.9%).

Running Backs of the week

Ezekiel Elliott brought his Superman cape to Bloomington and almost single-handedly lifted the Buckeyes past the Hoosiers. Elliott’s young dominance puts him in rare company… Iowa’s Jordan Canzeri not only lifted Iowa past Wisconsin, but he’s also elevated the program into the top 25 in both polls for the first time since 2010… Purdue’s Markell Jones is the reigning Mr. Football in Indiana and made his first big splash on the national scene against Michigan State. Recently turning 19 years old, he’s an exciting true freshman to monitor.

BREAKING: Leonard Fournette is having a dominant season… Confession: I just realized that UTEP’s Aaron Jones is out for the season with an ankle injury. The minimum number of games played to appear in the seasonal leaderboards is two; he’ll phase out next week… I need to find an Old Dominion game to watch. Ray Lawry was solid last year and has been amazing so far this year too.

Wide Receivers of the week

Alabama freshman Calvin Ridley came into this season as the #1 (or #2, depending on where you look) wide receiver recruit in the country and broke out in a big way against Georgia. For a Crimson Tide team still trying to replace Amari Cooper, and injured an Robert Foster, Ridley’s emergence could have huge implications… BG’s Roger Lewis now has three games of at least 200 yards and one touchdown this season. That’s a good career for most people… And, yes, there’s a guy named Edgar Poe on this list. Nevermore shall I include service academy players.

Off the bye week, and thanks to the slide of others, Daniel Braverman makes his first appearance on this list. I came into this season, and still am, higher on his teammate Corey Davis, but what Braverman has done so far this season has been spectacular. He has at least 10 receptions and 100 receiving yards in every game, including contests against Michigan State and Ohio State.

Tight Ends of the week

Hey, Bucky Hodges, good to see you! The 20 year old, third-year TE from Virginia Tech came into the season with high expectations and has been solid, if unspectacular so far. It’s good to see him surpass 40 yards in three of his last four games.

The three seniors on this list – Morgan II, McCord and Weiser all have at least one 100-yard game this season. I know that athletic underclassmen like O.J. Howard, Evan Engram and Hunter Henry get lots of attention, but these three are really helping their prospect status in their final season.

Special Teams Studs of the week

Artavis Scott is the most exciting name here. The Clemson sophomore only had one return attempt in 2014, but already has 13 so far this season. The fact that the coaches trusted him in the return game in the rainy conditions against Notre Dame is an encouraging sign… Jordan Franks is a name to keep an eye on. He was a 3-star recruit as a LB / WR and appeared in 13 games on defense as a freshman in 2014. He’s now playing on offense and, apparently, returning kicks. At 6’3 225lbs, he must possess some pretty unique athleticism.

Byron Marshall is out for the year with injury and Christian Kirk is still awesome; he received four carries last game in addition to WR and return duties. Translation: Kevin Sumlin, one of the best offensive-minded coaches on planet Earth, has realized that this kid needs touches however he can manufacture them… J.D. McKissic is a small school guy who accounted for 29% of his team’s receiving yards in 2012 (age 19 season). He has more than 2,500 receiving yards for his career and 200 rush yards. He could be a sneaky prospect to keep an eye on.